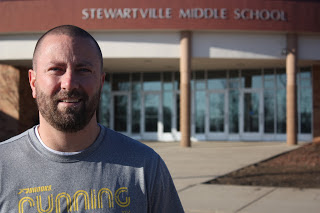 Twenty-five years ago, I had a teacher who changed my life one day. Very simply, he introduced me to distance running in health class. He had no idea how one class period would impact every part of my being. You see, I became a runner that day.

Since then I have had many others who have had an impact on my running by motivating me to do something better, to test my limits, to attempt something extraordinary. These people have included coaches, teammates, friends, and complete strangers who have shaped my running with or without knowing it. I find inspiration in many things, but none more than others who are passionate about running.

Now it is my turn to give back. Like a dream come true, I am now teaching in that same school in the small community of Stewartville, MN. I grew up here and am proud to raise my family here. Like I said, it is my time to give back, to inspire others, and to share my love of running with anyone who will listen. One lesson that I try to teach my students includes my personal motto about running. Don’t set your limits…go out and find them.

As a teacher I hope to inspire my students to do the same. Two years ago, I came up with the idea for Mr. Parry’s Endurance Challenge. The challenge was, by design, intended to be simple; my students were to complete twenty-four hours of exercise over a ten week period. There were many in the community who also took part, some making big changes in their lives because of it. Some came to run with the local running club I started, the Stewie Striders. My end of the deal was that I would run for twenty-four continuous hours around town at conclusion of the challenge for my students and others to see. In 2009 I completed 96 miles and came back in 2010 with the goal of completing at least 100 miles.


These were my thoughts written several days later:

The question that was raised over and over was whether or not I should turn my runs into fundraising opportunities, but it never was about that. My intention was always to simply get my students out to run. On the other hand, I knew that events like this could be used to help out others. My solution was to have a running event that would benefit a cause that I have a personal connection to.

Here are my thoughts from that run:

On August 3, I ran on a treadmill in the lobby of the Rochester, MN Area Family Y for 17 hours to raise funds for the Strong Kids Campaign. My family was able to take part in Y programs when I was a child because of this scholarship program. We would never have been able to afford those opportunities without the generosity of others. This run was called Mr. Parry’s Endurance Challenge for the YMCA and is one way I feel I can give back. My run at the Y was an extension of another run I have done the last 2 years in my hometown of Stewartville, MN. I am a 6th grade teacher there and Mr. Parry’s Endurance Challenge has been an effective way for me to motivate and inspire my students, the school staff, and others in the area to get out and be active. The end of this challenge culminates in me running for 24 consecutive hours, doing a 4 mile loop repeatedly around Stewartville. Last year I completed 96 miles. This year I was able to make it 100.68 miles. Even though my run at the Y was only 17 hours, it proved to be at least as difficult as 24 for several reasons. Boredom, body temperature control, needing to be able to visit for the entire time, and the repetitive nature of running on a treadmill all took their toll on me. The plan was to have 2 treadmills set up in the lobby of the Y – 1 for me and the other for anyone else who wanted to show up, contribute to the Strong Kids Campaign, and run or walk for a while. The Y had put up and advertized a schedule to get people to sign up for running/walking on the other treadmill and by the day before the run, every last one of the 15 minute time slots was full! Local businesses and individuals contributed prizes for an hourly drawing. The goal of raising $1000 was set and I was off. I was not concerned with the pain that might come later in the day. I just didn’t want this fundraising effort to “flop”. I began my run at 5am and had a phone interview that played on several area radio stations a couple of hours later while the miles comfortably passed by. Soon afterward the phones at the front desk started ringing with people wanting to come in and run with me. One call after another I heard the staff say that they were sorry, the other treadmill was booked for the day, but the caller could come in to contribute and see what was going on. People were stopping by to see if they could run or walk with me too. The decision was quickly made at that point to pull out a third treadmill from the fitness center to allow more to participate in the event. I passed the marathon point in 5:30 – not fast, but I had been expending too much effort and concentration on keeping my body temp down. I would run until feeling way too warm and, at times, nauseous. I would then walk for several minutes until things calmed down again. I had no breaks planned, but did allow myself to use the bathroom from time to time. I ate while walking or running in order to get in as many miles as possible. Both complete strangers and friends came and went, telling me their stories, contributing money, and thanking me for what I was trying to do. Some had very inspirational stories about how running had changed their lives; others were running to deal with the grief of losing a loved one or as a way to cope with other hardships . I always love hearing stories like that! While some of the camp counselors at the Y ran with me for a few minutes, the kids in their groups cheered us on. Local TV stations and newspapers came by for the story. They would later call for updates on how I was doing. All was going well at that point, with not a whole lot of pain in my feet or legs .By early evening, I was told that the $1000 goal had been met. Good. That pressure was off. I hadn’t wasted their time! By 8pm I suspected that I would be ready to be done at 10pm. By 9pm I was certain! The last hour was difficult, but my wife was there to reassure me that things would be ok. The problem was that I could see more concern in her face than reassurance.10pm – done! 67.5 miles. Not the greatest performance, but I will take it, considering all that happened that day. We raised $1550, which will be used to provide scholarships for needy kids to attend Y camps and programs.

So where does this leave me? Still looking for bigger and better! Mr. Parry’s Endurance Challenge 2011 has taken on a new twist - for my students and others to complete 26.2 miles of running/walking during the month of May. I have included several options for this, allowing both the beginner and advanced runner to set a goal and accomplish it. To conclude this challenge I will be doing 7 marathon length runs in 7 days, finishing up with the Med City Marathon in Rochester, MN on May 29th. After that, who knows? I am teaming up with a non-profit organization which promotes physical exercise for families. I will also be pacing some races this year with the MN PACERS, aiding other runners accomplish their time goals in races ranging from the ½ marathon to marathon.

I have plenty of things I still want to do with my running. The funny thing is, twenty-five years ago I knew I would still be running today, and that I would still have that same drive to seek out the extraordinary. Thank you Mr. R.!
Posted by Jim Parry at 6:31 AM 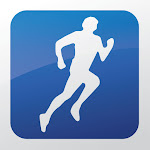 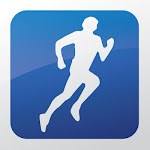 The story of Mr. Parry's Endurance Challenge has been published in a new book, now available in both e-version and paperback. Endurance Planet's Big Book of Bravado "Tales of Extreme Endurance" can be ordered through http://www.amazon.com/Endurance-Planets-Big-Book-Bravado/dp/1461155673/ref=sr_1_1?s=books&ie=UTF8&qid=1320156261&sr=1-1

Check it out if you are looking for some inspiring stories about running and other endurance events.

September 10 MN PACER for Get Ready To Rock 20 Miler